It is the end of May, which means the time has arrived for an incredible wildflower display to light up the steep slopes of Dog Mountain.  It doesn't last long, but for a week or two or maybe three, it is an mind-blowing sight to see.   To reach the summit wildflower meadows, you'll have to climb nearly 3,000 feet, but it is well worth it.

One of my favorite places on Dog Mountain is immediately after a particularly steep section of trail.  Winded hikers follow a sharp right turn out of the woods, look up and find they have suddenly emerged into an amazing scene.  I was standing just beyond this point, struggling to take photos in the strong wind.  I was in the right place to hear the stunned reactions of five or six groups of hikers.

This group had just finished various exclamations of awe and had begun hiking again. If you look at the upper right corner of this photo, you'll notice the hills disappearing into the clouds.  This is where I was headed next.  After a switchback or two, I was up on a ridge, where the wind was even stronger and the clouds zipped by.

There was still more climbing to do.

As a side note:  If you place a camera bag on a steep slope in these conditions, be aware that the wind can give it the push necessary for it to begin rolling down the hill.  It will keep rolling until it reaches something that stops it, which may be quite some distance.  In some places there is simply nothing to stop the bag and it will roll out of sight. In one particular place, there are trees that will stop your bag approximately 200-300 feet below the trail. If your bag contains your collection of lenses, miscellaneous equipment and food/water for the day, it is likely you will decide you want to retrieve it.  It will take quite a while to stumble and slide down the hillside to reach the bag and then scramble back up to the trail.  And there will be ticks.  Also, there is a chance that when you return home and look at the photograph you were carefully composing at the time the bag began its voyage, you will realize that it is not the best photograph ever taken.  In fact, it may not even be in focus.

After climbing through the fog to the summit, I sat and ate my lunch, entertained by a crow playing in the strong winds.  Then something unexpected happened:  The fog disappeared. 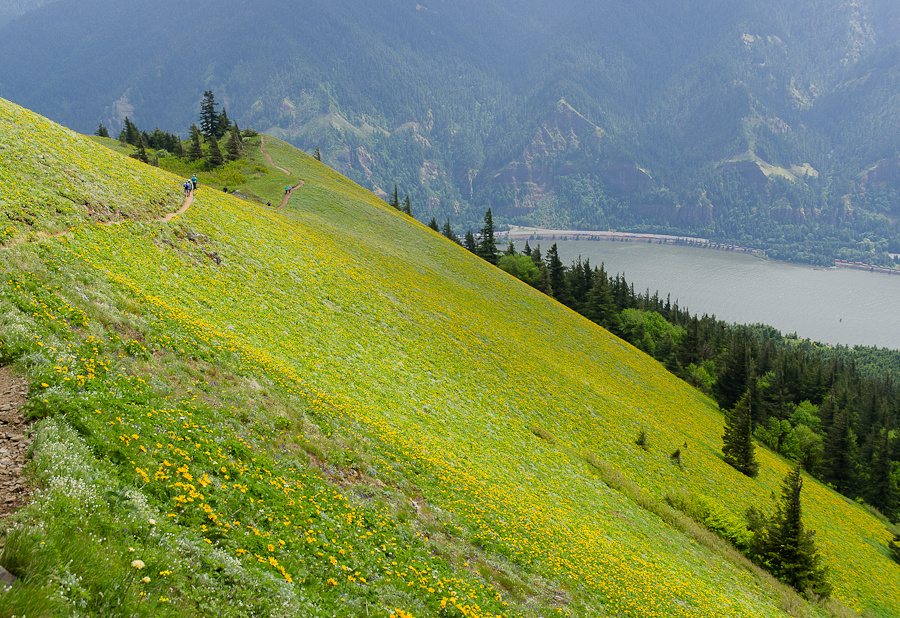 The sun came out and I spent a couple hours photographing the summit meadows.  I even found a few areas relatively sheltered from the still-howling wind where it was possible to make close-up photos of the flowers. I have many photos from the hike to sort through and edit.  I'll be posting more here soon!

In the meantime, don't forget to support your favorite open space and then head over to ThisOpenSpace and pick up a print.  And here's an idea: Father's day will be here before you know it.  You could make a donation in his name and then order a framed print or gallery wrap that will be ready to hang on the wall when it arrives.  Learn more here or contact me if you have questions.